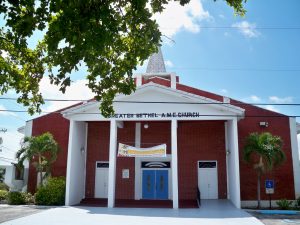 Prayers, sweat and tears were a major part of our fore-parents lives, as they earned $0.50 per day.  They worked long hours from sun up to sun down, sowing and harvesting the farmed crops, sharecropping, working as house servants: underpaid and under-appreciated.  Yet they managed to raise and provide for their families, inspiring their children on to better lives.

During these trying times and humbling experiences, segregation laws and hearts of hatred, a small group of believers sustained a God-fearing faith that inspired them to meet and worship God in tool sheds and farmhouses.  The leader of the faithful few was Parson Elia Rolle, a local minister from the West Indies.

Frequently, the group would send for different ministers to render services.  Among them were Reverend Flanders, F. D. Hall and Reverend Baker.  By 1911, the group of worshippers had grown considerably, so much so that they felt that they should be organized and taken into the African Methodist Episcopal Connectional Church.  Upon appealing to the Presiding Elder, the Reverend F. D. Hall was sent as the first pastor, his tenure was short-lived, nevertheless, he was able to organize the group into a congregation known as the Salter Temple A.M.E. Church.  The first church building (20 x 30 feet) was erected near the present site. The first Steward Board consisted of: William Brookins, Elijah Russell and Pampey Cooper.

The first Trustee Board consisted of: David Armbrister, James Green, Henry Casteel, and J.W. Thompson.  It may be of interest to note that in the first effort to build the church, $1,100 was raised by this small congregation.

Salter Temple was also destroyed.  It was under the dynamic leadership of the late Reverend William Buggs, that the church was rebuilt on its present site and its name changed to Bethel African Methodist Episcopal Church.  The Trustees during this era were: Caleb Folston, David Armbrister, J. W. Thompson, D. Devoe and William Brookins.

The enlargement and beautification of the church and parsonage were made by Reverends J. R. Thompson, C. J. Jenkins, R. H.. Mobley and A. W. Williams through the years of 1941 – 1961.

Bethel African Methodist Episcopal Church of Pompano Beach, Florida is a connectional church in the South Conference  of  the Eleventh Episcopal District (Florida and the Bahamas). To God Be the Glory for a church founded on the Word and Standing on the Promises.

Join us for service